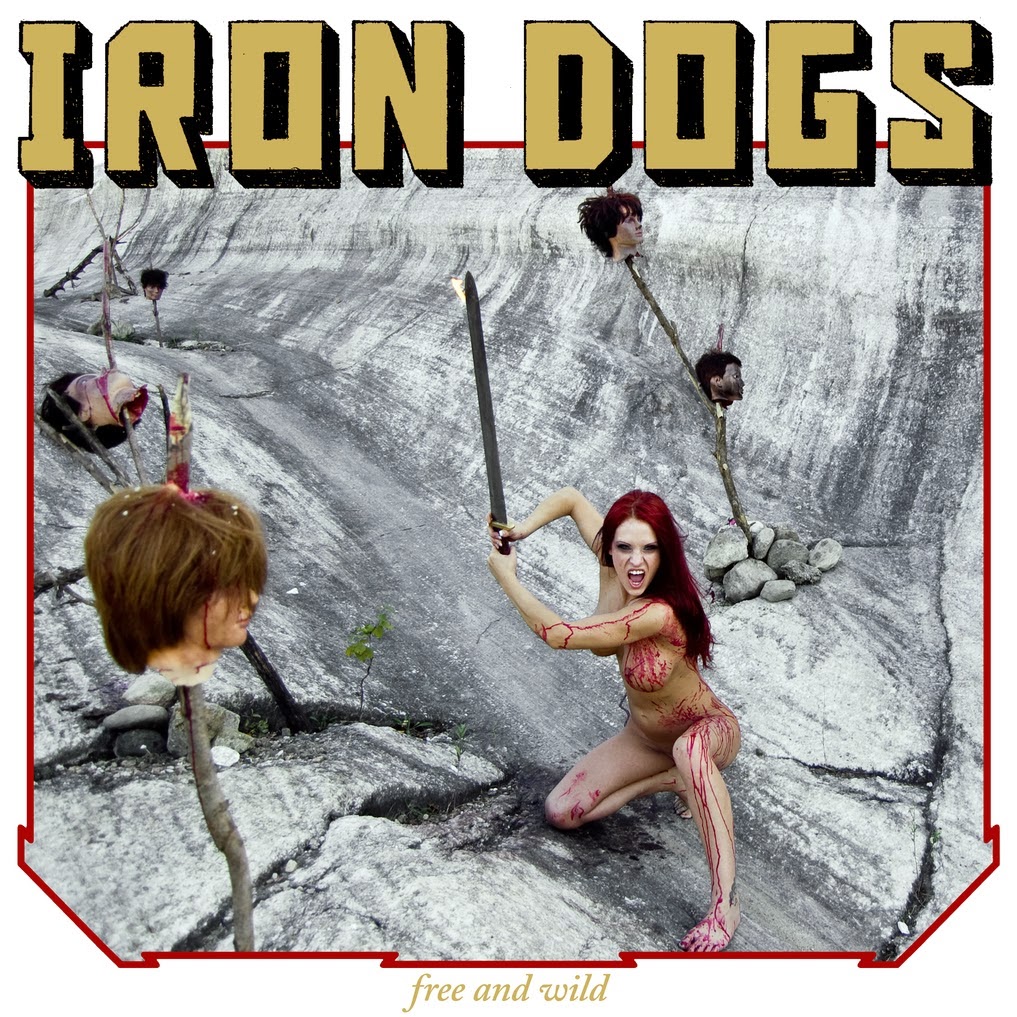 It's always comic to see a band wielding such a cheesy, over-the-top cover art somehow cultivate a far more unique and engrossing sound than a good many of its peers who invest such money and effort into their album covers. Good covers do no necessitate good music; I think we all know that by now. Here's the second moral of the day: never judge a book by its cover. Indeed, a sword-wielding angry wench surrounded by a bunch of heads piled up on wooden stakes does precipitate the most worldly and intriguing of musical machinations, but however much this may be frowned upon, there's no denying that neglecting Iron Dogs' sophomore ''Free and Wild'' is a big mistake. With a wise selection of precursory influences that extend further than simply Maiden and Priest, but with a celerity and liveliness that would make the two gods proud, a pop/rock-variety brevity in the songs, and more melodies stuffed in a mere 28 minutes that so-called ''melodic'' metal bands would dare imbue into their song patterns, ''Free and Wild'' screams out with nostalgic, unabashed bliss.

''Free and Wild'' is such a load of tremendous fun and 80's awesomeness that I can't really state its selling point. Everything shines through. In case you still couldn't get a picture of what the Canadians have in store for you, I'll be as lucid as possible. The album draws strength from a number of concurrent influences freely flaunting with each other; the occasional Maiden, Priest, but there's still more Jag Panzer (think ''Ample Destruction'') than, I daresay, any other retro heavy metal to ever strap on a guitar and mount a drum stool, and I haven't even begun to mention the minuter spectrum of sounds converging in the mix, notably Angel Witch, Exciter, Agent Steel, ''Kill 'em All'' era 'tallica - even tits and bits of Razor flirting with the more rapacious outbursts of tempered energy. Yet in all the colorful palette of influences, creating a true melting pot of traditional heavy metal, (if not an apotheosis of the genre's manifestation) the Canadians somehow dazzle the listener with style of their own. The same way the English Deceptor challenged me to my wits' end with the sheer insurmountable quality of their EP ''Chains of Delusion'', Iron Dogs manage sound as cool as bands did in the past, without being tied down by the past.

Swirling, spiraling flirts of harmonious melodies are reminiscent of Satan's outstanding ''Life Sentence'', but different still. Irreprissible and meretricious, ''Free and Wild'' in the kind of album that refuses to be bound to the ground with chains, and attracts attention with its sheer punch and crudity. The manic, melodious guitar riffs aside, though, vocalist Jo Capitalicide can just as well be the BEST thing this record has to offer. As much as I am a great big guitar nerd myself, a staunch boaster of technicality and blazing guitar solos, Jo's vocals enamored me so much that I could listen to the first 3 seconds of the ending track ''Island of the Dead'' over an over again just to immerse myself in his outstanding voice. No need to elaborate - the man in the resurrection of Harry Conklin of Jag Panzer. Doused in reverb and heedless of ''professional'' vocal values, his inflection kicks nigh-over as many asses as the plodding guitars. Who said heavy/power metal had to be done with a banshee, screaming at the top of his lungs? Jo fits the bill for ''Free and Wild'' more perfectly than I might have conceived, and literally catapults Iron Dogs to the next level of musical excellence.

Any gripes? Only that the record was too fucking short! Given that the whole record clocks at 28 minutes, it's a bit difficult to excavate a huge deal of pleasure with just one spin. ''Free and Wild'' requires more frequent spinning than a dozen or so efforts by the generic retrogressors of the field. For fucks sake, if you can't derive any fun from the maniacal chords and melodies fluttering around the record, nor Jo's vocal delivery, you need to see a doctor, asap. But Iron Dogs are still willing to forgive that. Just open the lyrics to the title track and sing them out; the anthem is so utterly uplifting that it motions involuntary nods even as I'm writing this. Indoor! No more! And for the love of God, if you're still not properly enthralled, you need a serious fix. Sure,''Free and Wild'' may not be the masterpiece of the decade, but its sheer distinction serves as a viable consolidation for the fact, for which I couldn't care less. Enter, but beware of the nude guardian lying in wait. Posers need not apply.

Highlights:
Firebird
Free and Wild
Adversity
Island of the Dead

Posted by LaceratedArthalos at 2:41 AM No comments: 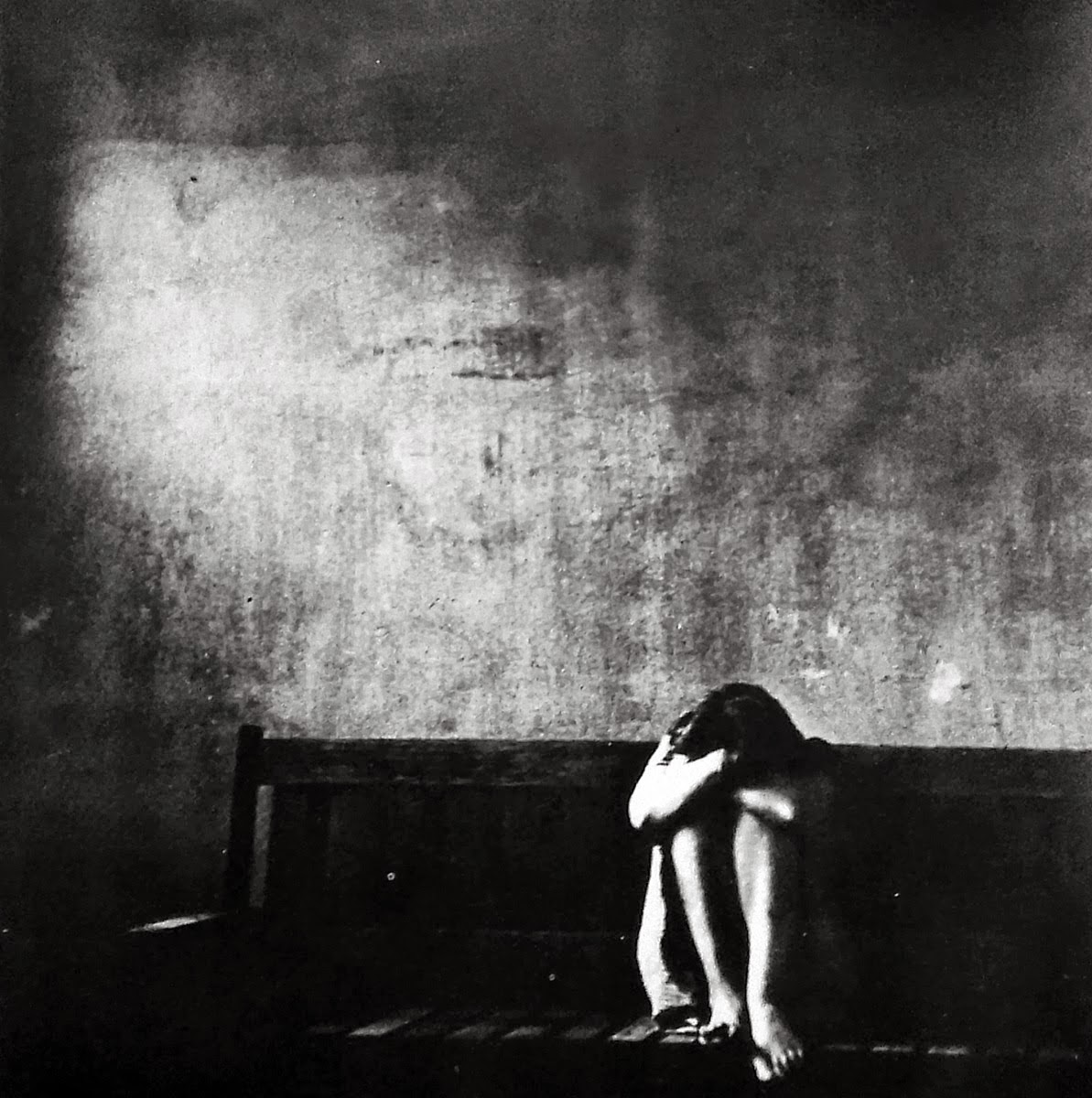 Although it's become a serious difficulty to find an apple that's not ridden with worms nowadays, it is more importantly increasingly difficult for artists to discern themselves in the metal universe. That one third, however, seems to be the front-runners of the genre, the ones carrying the torch in the darkness, and the mavericks of black metal, who, usually, despite their outstanding achievements, fail to make into major markets, constantly bested by the more fashionable and over-hyped kings of the scene. Unfortunately, the question of why we humans neglect and demean the small is a discussion for another day. The real story here is Thantifaxath. A bunch of hooded figures hailing all the way from Canada, nothing out of the regular, you'd imagine. And coincidentally, just as I was perceiving a subtle divergence in Dark Descent Records from its usual old school death metal catalog, to my delight, I found they were also bolstering these guys with their debut album - probably the most enigmatically apocalyptic concept album (if you can call it that) I've heard all year. It's noise. It's sacred. And it's white. What more can a man want? Three of some of the most favorable things in the world in one wholesome package.

That aside though, ''Sacred White Noise'' pushes itself all the way from the boundaries of mediocrity to a self-sustained crevice of its own, buried under its own unique bliss. Being from Canada, you'd expect the trio to put out a performance fit for their Quebecois counterparts, and while it's not a whole different plot from what Gris and Monarque is doing, undeniably there is a great deal of difference. Where to start? From the fantastic opener ''the Bright White Nothing at the End of the Tunnel'' with its pallid aftermath allusion, to the impossible denouement ''Lost in Static Between Worlds'', the album is such a convincing and attractive force over the fatigue of traditional black metal bands that I found it to be one the most addictive black metal opiates I've hard since 2012. What seems to be a reasonable continuation of what Deathspell Omega and Negative Plane are doing is actually so much more; a brilliant and discordant witchery of crystalline chords and restless, relentless voracity. That's probably enough to summarize any black metal outfit in the field, but Thantifaxath takes its further. The progressive elements on this record are nothing short of stifling and formidable. I could have just said that the Canadians were giving test runs on a few of the Enslaved songs from their last three records, or just fleshing out the psychedelia of Hail Spirit Noir - but no. Imagine precise technical riffing plotted out perfectly along the bantering chords, a nightmarish descent into hemlock and the long-waited afterlife...

Yet the record initial tracks are so dense with ideas that you'd be less confused and frightened at gazing into pit of spidery demons. That's not to say the latter tracks lose their lust, but after the ideas have been presented the Canadians simply outline them once again for the obfuscated listener which helps convert utter bewilderment into comprehension and appreciation. ''Sacred White Noise'' is as moody and depressive as the downtrodden child on album cover, but I would fail to do them justice by leaving it there. Here, depression turns into anger, anger into momentum, and momentum into actual quality. On top of it all, there's this almost unprecedented sense of modernity that lurks deep in the ambient cinematic effects that encircle the record at random intervals. We're not talking 80's horror flicks here, folks, but some of the most creeping, crepuscular cinematic soundtracks I've heard since Cultes Des Ghoules released its magnum opus last year, and though this album doesn't score the same level of fright as the former, with fiendish musical acumen it's the prized set of songs that would resonate through an old abandoned church. And with the intro of ''Gasping in Darkness'' it manages to do just that. In a manner, there's certainly an approval of Negative Plane's aesthetics, with seamless, oriental harmonies strewn arbitrarily, but, as said, Thantifaxath hardly fails to be an album of its own.

Despite the clarity of the guitars and the harsh, punkish guttural lows of the vocals, ''Sacred White Noise'' is still a hard pill to swallow. It's rich, with a myriad mortal wounds engraved on it like permanent tattoos, like ash and dust on a broken piano. To be fair, I'm a bit of a hypocrite at not giving this album a go in the first place. Only after a few positive reviews on the internet did I feel actually elevated about it finding its way to my pool of promos. And even so, it didn't quite kick the first time. The second spin gave me somewhat more pleasure and understanding, compared to the mild appreciation of the first, but after the third listen the album's cavernous soundscape and dissonance had me captivated like a bug in a jar. It's absolutely terrific musical experience, your free ticket to a live orchestral cacophony, delivered by the three hooded impresarios. Though not quite the record that would be bequeathed to later generations, if you know a band can conjure anything as haunting as ''Eternally Falling'', you know you ought to get it, regardless of your futile taste.

Highlights:
The Bright White Nothing at the End of the Tunnel
Gasping In Darkness
Eternally Falling
Lost in Static Between Worlds