Of Spire And Throne - Vagary 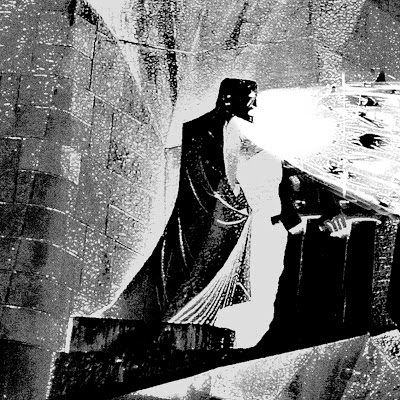 Indeed, the sludge scene is a scene that has been much better familiarized by mainstream audiences than its legendary yet somehow degraded counterpart doom metal, but is comparing these two genres was ever the situation, I'd choose doom every single time. One of the prime reasons of my verdict, is a growing rumble of underground vibrations which find themselves hooked upon the lugubrious styles of doom, now broadening their spears and axes to dabble their material in even more primal succession than before, instead of keeping true to the traditional bloodline set by the masters Cathedral, or Candlemass. This fresh surge has revivicated the murky and ultimately dismal power of death/doom along with other provokers of sadistic and incomprehensible tyranny such as Antediluvian, Portal, Vasaeleth or Mitchondrion, who, although have certain differences, still aim to grasp that dark and drowning filth riddled subtext of torment, and these ghastly explorations continue for my latest discovery, Scotland's Of Spire And Throne, is the definition of monstrous death/doom.

Alongside my second death/doom favorite of the year, ''Serpentine Path'' by the infamous Serpentine Path, OSAT's ''Vagary'' has evoked a cunning sense of degraded mutilation and clawing, incessant yet drudging torture in me. These rank, befouled golem-fiends are actually a relatively new wave of bands. They do not intensify any of the olden death/doom masters in a way of ripping them off, but they bathe themselves in this tempestuous momentum some seek to find so often these days, creating Cylopean monoliths, swaggering slowly, painfully. Vagary exposes all the filthiest material they have and collapse in one single twenty-minute fall, and the earth around you literally quivers in response to this lurch. In such a drowning, asphyxiating cauldron it's merely impossible take a break through all that fog and plumes of dark dense smoke and breathe, which is pretty much the gold of the EP. The rhythms are immense, layered with exceedingly simple crunches and crushes, plodding along the elephantine obelisk, but every lurch is an all-encompassing spasm flushing through your thoughts and smoldering your brain - the perfect mind fucker.

The vocals are scarce, as they seldom jump into action and prefer abusing the rhythms from afar with distant gurgle growls, but the best thing is that they're laid down with a nice hint cavernous murkiness, a stupendous manifestation of evil. ''Vagary'' is simply excellent if you are into such mourning drudgery of doom and death, and even fleshier a treat for those who devour funeral death/doom combos emerging from the cthtonic debts. However, even though I am a huge sucker for death/doom darkness in the vein of Winter, I need to confide that the material here can be overly boring and far too monotonous for those of you who seek more vivacious experiments; but even so, I don't think many will manage to overcome the encompassing murk of this album, and albeit I don't love the drudgery here, I'm still going to show my support for this mischievous quartet and abominable creation. Keep it up.