The Cream of the Crop: Arthalos Picks His Best of 2016 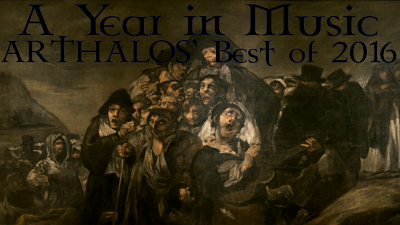 This year I managed to expand my cream of the crop to 25 pickings, as a lot of great but not absolutely riveting works tend to get dismissed when lists are severely downsized. If anything, I thought 2016 offered an even more motley platter of goods when you look at the overall span of the records I enjoyed, but their year-on-year qualities are roughly on a par, which is a definitely a positive when I look back to 2013 and 2014. The latter two were not 'bad' by any means - not by a mile - but I think the surge of quality has been upped by a healthy pinch with the last two years. Moving on.

As always, my top crop is a shapeless mesh of different genres and tastes. Since some of my favorite avantgarde artists had released records last year (Arcturus, Sigh, Solefald, DHG) this year was somewhat devoid of their clownish, gonzo black metal expressionism, but to cover up there was a fairly large plate of progressive-tagged servings. I am not the biggest progressive metal devotee (Dream Theater and Opeth do get unabashed ticks in my book but that's a good given for many metalheads) so it seems strange that six out of my top ten have overt 'progressive' tendencies, be it Ihsahn's idiosyncratic mold of Emperor-isms and amplified 70's prog rock, Stam1na's unique brand of proggy groove/thrash, or Votum's 'chugressive' (see here for reference). It's simply loaded. Nevertheless, every album here occupies a distinct sector of sound within metal. No two are even relatively similar.

Two great experimental Greek black metal albums (Hail Spirit Noir and Aenaon) and a much-waited Virus record round up a small but addictive bastion of insanity and boiled freakishness that compensate for the larger lack of avantgarde; Lovecraftian old school death metal tribulations a la Chthe'ilist and Howls of Ebb carry the banner of appendage-laden antiquity for a genre that was starting to pale out in the last couple of years; retro heavy metal searching back into anything from Thin Lizzy to Iron Maiden and Manilla Road gets its due (Spell, Eternal Champion, Attacker); black metal shows in a myriad forms why it isn't even close to running out of season (Nordjevel, Winterhorde, Eldjudnir, Anaal Nathrakh, Khonsu, Oranssi Pazuzu); and even the sludge/doom niche, something I usually don't look forward to listening to, let alone push so high up among my preferences, gets some representation with the new Khemmis. The only travesty among this potpourri seems to be the Avenged Sevenfold record: an admittedly difficult choice for me, but trust me when I say I fervently listened to the shit out of The Stage, a fantastic transformation from an otherwise negligible outfit. And so high up, too? My conviction remains unchanged.

My pickings come full circle as the greatest diadem went to Terminal Redux. No other record felt so complete, so epic, from its magnificent lyrical narrative to its compendium of titillating technical thrash riffs, although the top 4-5 records did come close. It was sad hearing three of their four members departing after the tour.

I've also decided, for a change, to make a brief pool of records I haven't got around to listening yet, particularly those which received a lot of internet media buzz. Because I'm a terrible person and often prefer discovering obscure lumps of black metal via Mortuus instead of checking the freshest Metal Blade releases. So this is pretty much a list of albums I want to hear in the near future. Don't be surprised if you see some of the below names cropping up randomly on my top 100 list in the ensuing weeks.

Bear in my mind also that my top 25 does NOT include EP's and demos, as I've reserved those for my larger, non-hierarchical grain storage of 100 metal on RYM, which you can access here. The list has brief commentaries on each entry in case you were curious why I thought those were among the best albums of the year.


Unlike last year, there won't be any feature length non-metal list, as I was able to find less time research other music when preoccupied with metal in general. From what little I did hear, however, new albums by White Lung, John Carpenter, Phantogram and David Bowie are all extremely worthwhile. I might add an extra splash of names to that list later on in 2017, but no promises.

Posted by LaceratedArthalos at 12:09 PM

Email ThisBlogThis!Share to TwitterShare to FacebookShare to Pinterest
Labels: 2016, Best of