The Cream of the Crop: Arthalos Picks His Best of 2017 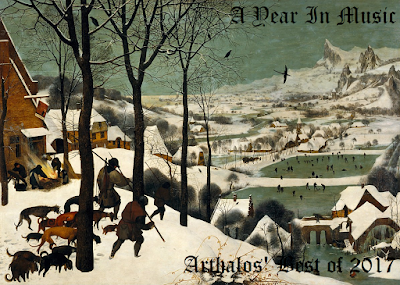 Albums I haven't heard yet:

I've also written up on rateyourmusic a list for my favorite 100 metal records for the year, in no particular order, with descriptions attached to each entry. You can access that list here:

Another very strong here overall, with Britain compensating for the political shenanigans in the previous year with a superb lot - both seasoned veterans and a couple of relative newcomers. A few deviants like Japan, Belgium and the Netherlands, but otherwise the list looks like a surefire dominion of American, Swedish, Norwegian and Finnish panache, reaching across several distinct genres (my top 100 pickings were much more diverse globally, however). A radiant comeback synergy is prevalent, whether it's Akercocke or Mastodon or Deep Purple, although many of the more experienced bands on this list had already been producing impregnable outings for a while. The Dool and Hällas albums may seem like a cheat, but ultimately both bands come from a hesher tradition and had a huge number of very 'metal' riffs on parade, so I had to do them justice. The top three entries were perhaps the most difficult to order: while I was mesmerized both by the ways in which Enslaved turned the genre around its progressive head yet another time, and by the stellar 'pure' power metal gusto of Phoenix, the Ukrainians were too close to perfection to be pushed to the back row. A sliver away from the majesty of The Voice of Steel, Істина is an near-immaculate haunt of folk, electronics and black metal, and the mere name of Nokturnal Mortum is titular enough to gladden my heart.

I won't promise that everything on the bottom 10 is there to stay, though I can promise that all of this is getting repeated listens on my iPod. Fhtagn fhtagn to everyone who's still reading, and hopefully 2018 will be more propitious for the blog.
Posted by LaceratedArthalos at 11:18 AM

Email ThisBlogThis!Share to TwitterShare to FacebookShare to Pinterest
Labels: 2017, Best of