The Cream of the Crop: Arthalos Picks His Best of 2015 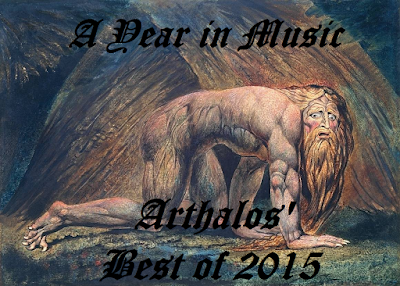 Overall I felt this was quite a strong terms of both quality and quantity across all genres of metal, but that has always been the case so I doubt 2015 surpassed annual mean scores by a great deal. In another sort of Murphy's Rule for yearly releases, the bulk of the quality was concentrated in the first and last couple of months, at least for me, and the pool of better releases in between was spread out a little more thinly. Still, that may also have to do with the fact that much of my own lack of research during these months was due to a combination of slight disinterest in and reluctance to pick up newer recordings at the time, which I managed to rectify somewhat by the end of the year. In terms of reviews I did start strong but my writing dwindled as lots of real life issues started filtering in, and unfortunately I had to conclude the year on a low-ish note in terms of reviews. Towards the end of the year I pushed to listen to as many new albums as possible, thus molding the current shape of my lists, but of course a good deal of albums went below my radars. I hope to make up as much as I can for those in the initial months of 2016.

Nonetheless, there was an excellent scree of releases all around, with France and Norway sticking out more than usual, beyond the usual suspects like USA and Sweden. France may not have made the top 20 cut, but it produced metric tons of great, caustic black and death metal in its national brew, fitting selections at a time when Deathspell Omega have remained idle for a good long while (seriously, new album better be in the work, guys). And Norway just trumped with an unprecedented triplet of gold from its three avantgarde mavericks Solefald, Arcturus and Dodheimsgard (though the latter did not make the cut) who assuredly produced enduring masterpieces to enrich the legacy of their discographies. But of course the Enslaved album, being more 'black metal' than its gonzo counterparts, perhaps one of the safer records they've done in the last decade, is also fantastic. 2015 is perhaps most surprising considering the wealth of releases that either belong to long-time masters (Sigh, Raven, Motorhead, Saxon, Solefald, Angra, Satan, Killing Joke, Enslaved, Arcturus, even Iron Maiden, etc.) or newer entrants and banner-carriers who had already won my heart from a few years hence (Horrendous, Sulphur Aeon, Tribulation, etc.).

As always, I avoided or just downright disliked many of these uber-hyped mainstream metal records, not to mention the mass of stoner/sludge material promulgated by media-friendly review sites and communities. But downsizing that pool in its entirety is also risky, as several of the year's best turned out to be some of the most 'overrated', like the Ghost or Enslaved records.

I have also compiled an extensive list of my 100 favorite releases, in non-hierarchical order, so as to provide a little more mileage on the density of worthwhile recordings for the year. You can take a look here

YouTube links have been embedded in the lists below.

Edit: After numerous listens the new Leprous record has earned my heart's fondness with exponentially high returns, hence acquiring a spot in the top 10. Pushed back the Katavasia album and replaced the Enforcer album with the new Nechochwen record.

A little addendum on my non-metal choices. Of course my auditory leisure time generally circulates around the realms of metal, but these albums reflect part of my interests outside of those realms, and as you may have noticed this year supported a wealth of wonderful pop albums with scarcer electronic music, rounded by a selection of rock albums of varying style and contour. Every album on this list is compulsive and I enjoyed them immensely, but I have to say the Everything Everything album earned its plaudits by far, a record I listened to more than any other album, in any genre. That may be partially because the songs are fairly short, but I also found myself in entranced with the Brits' ability energize with song after song, amazing falsetto vocals, synthesizers and other electronic influences popping in - just fantastic. I cannot recommend it enough, even though it has some minor flaws. But the Susanne Sundfor record comes close, despite the simplicity of the compositions. The John Carpenter album of 'lost' film scores is also extremely noteworthy, and should come as no surprise for someone who adores the man's backlog of 80's horror flicks. The oddest ball of the bunch is arguably the Sammal record, which not only restored my faith in modern prog rock outfits but strengthens Finland's hand as one of leading conduits of 60's-70's worship. Points for Svart Records (which also released the new Seremonia album this year). 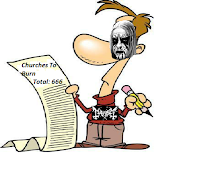 Of course during the course of over 4 years of blogging here, I've kept tabs on MANY blogs, and I've always had an inexplicable sympathy for fellow bloggers and reviewers alike. This year has been no exception. Therefore I've decided to make a compilation of all the notable year-end lists I could muster, since the idea is to make the music as widely known and accessible to people as possible. Granted, I may have my own little grudges about these lists, but rest assured it's nothing personal, in fact differentiation between choices is always welcome, so long as the list isn't a big, fat, cock-swallowing ape of Pitchfork's Top 10 albums of 2015. What follows is a comprehensive list of all the year-end lists I could find, although obviously with that excuse the curious reader is also encouraged to read through the other articles and reviews in the respective blogs. Some of the blogs I've linked can also be found on my blog roll column.

Autothrall's Execution Through Listification: The 2015 Edition -- The best of the best. His lists amaze me for their depth, range and also for the sheer fact that I tend to enjoy almost every record in the top 20-25 unanimously. There's also a very extensive bonus section comprised of top-lists for books, non-metal and various games. Simply mandatory for metal music nerds.

The AMG Staff Picks the Top Ten Records o’ 2015: There’s No Accounting for Anything Anymore -- I love AMG's brash, in-your-face attitude when it comes to reviewing, and I certainly feel most of the time that their high scores are justified, plus they seem to be seated in some kind of independent twilight zone between the 'poorer' bloggers such as myself and the more mainstream milieu of music reviewers, in their own social commune which is just awesome. The end of the year lists are always great and exuberant, with so many different staff members with different tastes. Be sure to check out the individual lists as well.

Skull Fracturing Metal's Top 30 of 2015 -- Perhaps a bit too high on modern power and traditional heavy metal but SFM has nonetheless been one of the very first blogs I've been acquainted with since my initiation and consequently I can't help but promote this list.

Listmania 2015 (No Clean Singing) -- These guys have a freaking open sale of awesome lists every year, from so many different users and with different labels that I can hardly keep track of all them. This is just a link to one of those individual lists, be sure them to give them all a decent look.

Arson Cafe: 2015 Dispirit -- Just a very well composed list that endures no truncation, leading up to 100 entries, all listed hierarchically. All sorts of meritorious extreme metal can be found here, as well some more modern metal records that should accord well with you if you have experimental tastes.

The 2015 End-of-Year List (Heavy Metal Spotlight) -- Just seeing the Slugdge album at #20 makes me happy. I dunno, man, it just does. Plus range and diversity run fairly wide with this list, An opportunistic mash of death, black, doom and traditional heavy with a good focus on the more 'old school' side of things.

Best Albums of 2015 (Metantoine's Magickal Realm) -- Basically your go-to blogspot (along with Slugdelord) when it comes to DOOM. All sorts of great, obscure, retro-related rock and metal here, and the list is pretty sweet to top it off. So much of a 70's stoner reprise in this blog that it practically begs a joint while you're browsing for music.


Finally, you can seek here an even larger compilation of RYM lists, if that's your thing, a great, long shelf of worthwhile lists with actual descriptive commentary and out of the ordinary pickings. That rounds the end-of-the-year craze for 2015. You have no excuse not to check out at least a few of these works. Now is a time for rest, which I believe I've earned, shortly before I get on the 2016 bandwagon. Praise Cthulhu and stay metal, my friends.

Posted by LaceratedArthalos at 12:51 PM