Begrime Exemious-Visions Of The Scourge 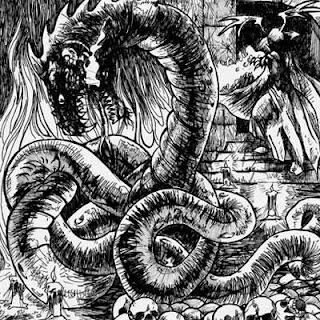 Canadian black/death combo Begrime Exemious exploded with the release of their most recent effort, ''Visions Of The Scourge''. Unlike many bands who tend to sink lower in quality with each release, Begrime gradually advance towards even more filthier music, and they certainly don't succumb to the pathetic modern metal trends easily. At first, I remember finding this record quite mediocre, but it's a fact that it takes a couple of listens to grab a sufficient amount of the listeners interest, and a couple more listens to pull the listener towards its eternally numbing, chaotic vortex. Just one glance at the black ad white cover art can be a very vivid image of what the album has to offer, a venomous serpentine creature lurking in a crypt laden with skulls, painfully slithering around flames. This album is downright evil and filthy, and its venomous flames will consume a listener slowly, but painfully, giving him/her little chance to run or fight back.

On ''Visions Of The Scourge'' you'll find a nice amount of influences engaging each other abhorrently without hesitation. The album's incredibly raw and unpolished, and despite the massive black metal influence looming over the music, the riffs manage to sound very sharp and groovy, with the additional raw production quality deviating the music, forcing them to dive headfirst into walls with no control. I also found the album to be thrashier than usual, but most of the thrashiness comes from the groovy chainsaw Swedeath guitar tone, another ghastly detail to add to the music. There's almost no use of melody, but with so much chaos and distortion lingering about, there's scarcely any need for melody as even the smallest dose might ruin the album and its amazing raw quality. The vocals are your typical ear-grinding rasps, the ones occasionally used in war metal bands, and they blend into the chaotic music very well. I also see little or no technical proficiency here, but just as the usage of melody, its completely unnecessary because the riffs can sound catchy and crunchy enough with no additional aid from any other aspect in the music(as if there are any).

I can also hear some other influences that aren't as prominent as the other such as an early Autopsy sound, with a few doomy passages added here and there to grab the attention of old school doom metallers as well a turbulent punk attitude caught in the mix, providing some good headbanging moments for the listener. ''Chasm To Obscurity'' is such a track, carrying both doom influences and an outrageous deathpunk attitude, making it a very diverse and creative track. Longer tracks that tend to stretch as long as six or seven minutes consist of instrumental moments during their second half, and that's when the band needs to create a abundance of catchy, venomous riffs that can flow with ease on their own, with no help from the vocals, and fortunately the brutal groove mustered in these tracks pull the listener to themselves, showing that they won't yield to boredom that easily. Every track is damn near stellar and every track is just as volatile as the previous. ''Visions Of The Scourge'' compels any sort of melodic/technical/polished sound away, and brings the listener one huge step closer to the atmosphere and the raw black/death sound of the late 80's and early 90's. It's one disgusting discharge of abominable blasphemy, heavy, utterly pulverizing and in-your-face. Get it now if you're into deathpunk, war metal, old school Swedish death metal or black/thrash, as this monster has them all.

This blog mainly consists of reviews and was born as the product of numerous interactions of metal and writing. The main purpose is to support bands all across the globe, little or big, and to satisfy my thirst for writing. Unfortunately, the only time I can really get prolific with my reviews is on lengthy holidays, and my basic aim is to make 5-10 reviews a month - a considerably good achievement for me. Rarely, I'll post interviews, and I also tend exchange reviews with fellow blogs every now and then. Currently, I'm mostly focused on curating end-of-the-year lists, with RYM links to shorter reviews added.